About three weeks ago we went to the Fig and Olive restaurant at the Meatpacking District for dinner. The dinner had two purposes; to celebrate my daughter's graduation from Middle School, and it was also a goodbye party for my au pair. Very bittersweet. The Fig & Olive is one of the well know NYC restaurants, and not least because it's the favorite of Fredrik Eklund of Million Dollar Listing, or at least it's where Fredrik often meets with clients. I'd been there a few times but had kind of forgotten about it before seeing it on the new season of the Million Dollar Listing NYC. Anyway, it's a very nice restaurant, with great atmosphere and of course superb food. 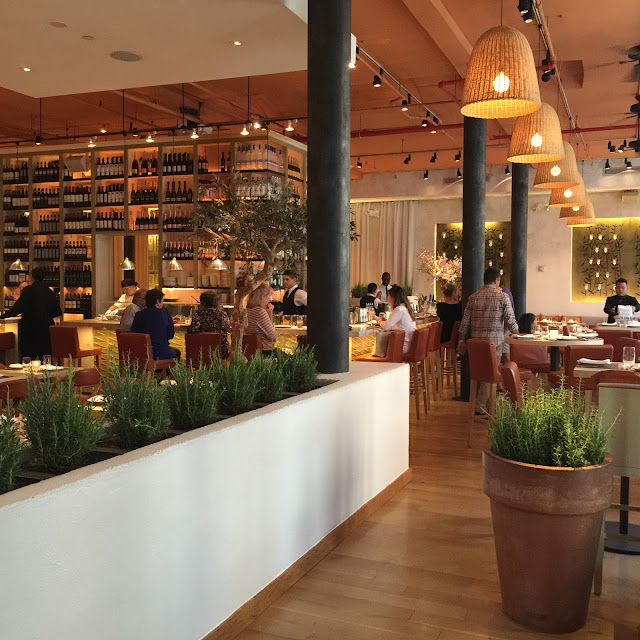 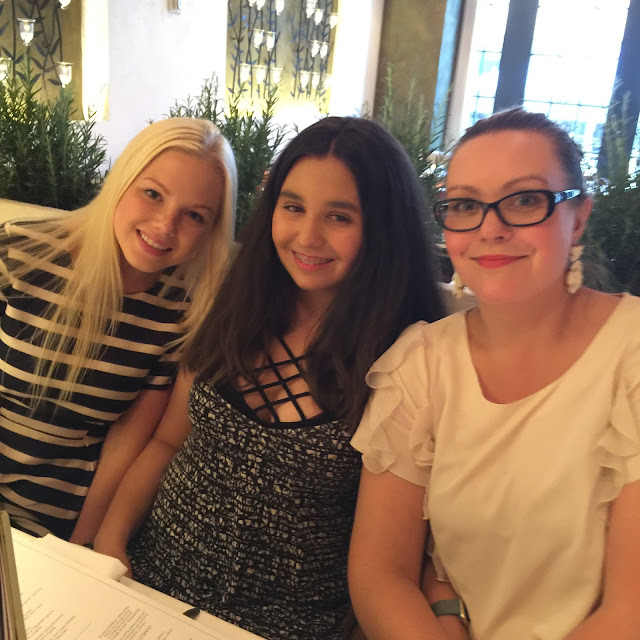 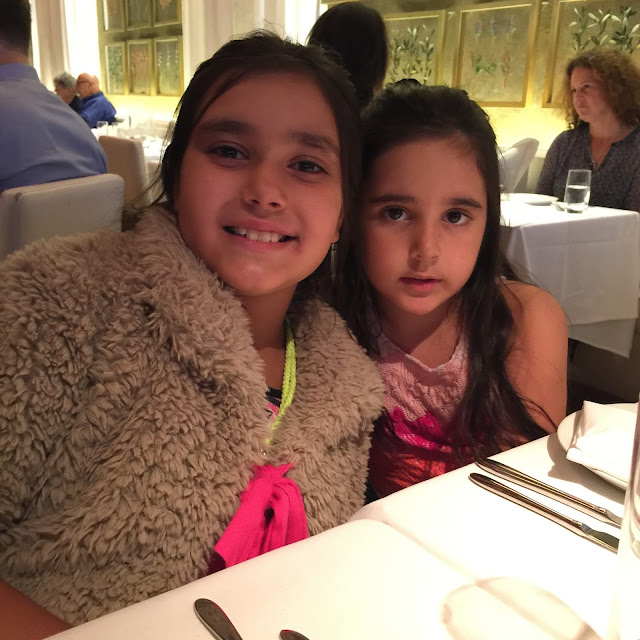 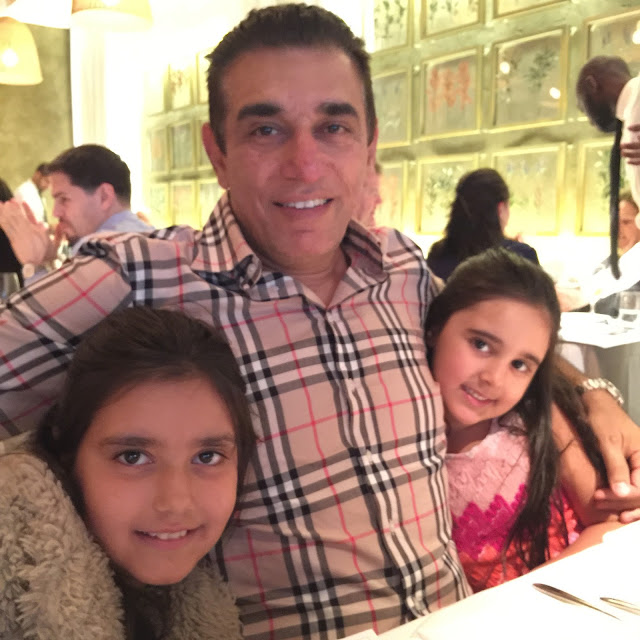 It was a great night - good times with good people in a good place. I probably won't go there anytime soon again, but if I see Fig & Olive again on the Million Dollar Listing, I'm sure to get a bit nostalgic.
Posted by Liladyblogger at 2:38 PM No comments:

The Swedish midsummer festival takes place at the Battery Park every year on Midsummer's Eve. I used to go with friends every year when I still lived in the city, but I don't think I've gone once since I moved to Long Island. Too much traffic and too much hassle. This year, however, we had to be in the City on midsummer's eve, and I figured, let's show the kids what the Swedish midsummer is all about. The swedes erect the midsummer pole (juhannussalko) and dance around it in traditional costumes (kansallispuvut). A band plays traditional music, and you can buy Swedish goodies, beer and vodka shots. People bring their picnic stuff and meet up with friends. Since we were schlepping around the city all day, we couldn't bring much picnic stuff, but no worries, there is a gorgeous new food market at the world financial center, by the new Brookfield Place mall, called Le District. We got a couple of sandwiches, a salad, and some drinks there, and picnic was set. The kids got to make the flower crown (kukkaseppele) and we had a great time telling stories and relaxing in the beautiful sunshine gazing out over the Statue of Liberty and the Jersey City skyline. 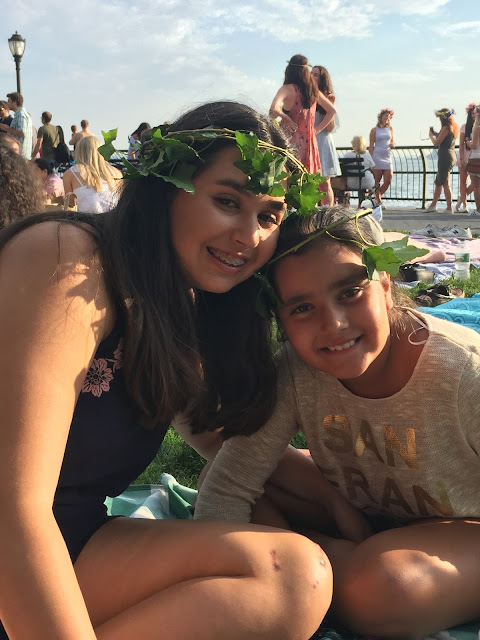 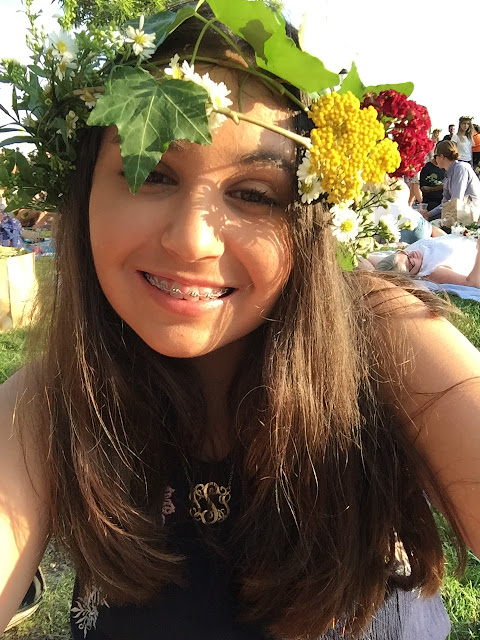 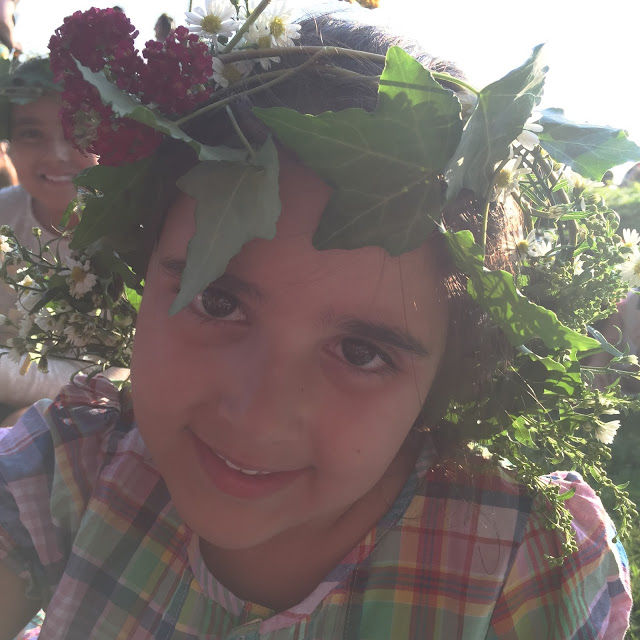 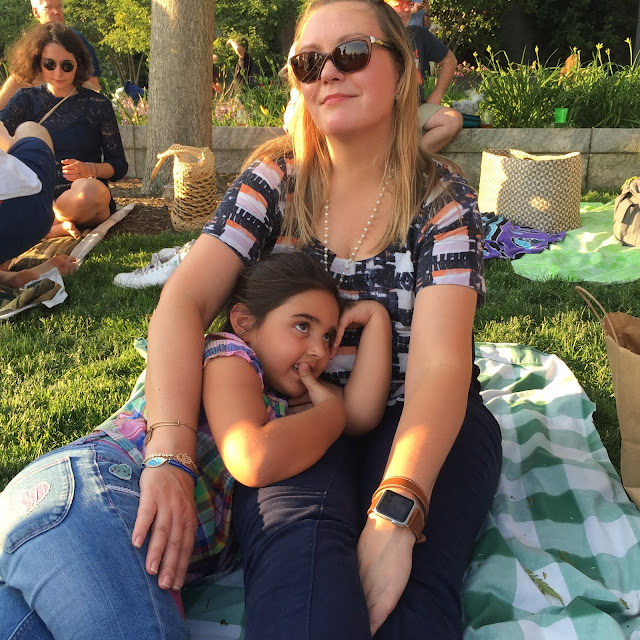 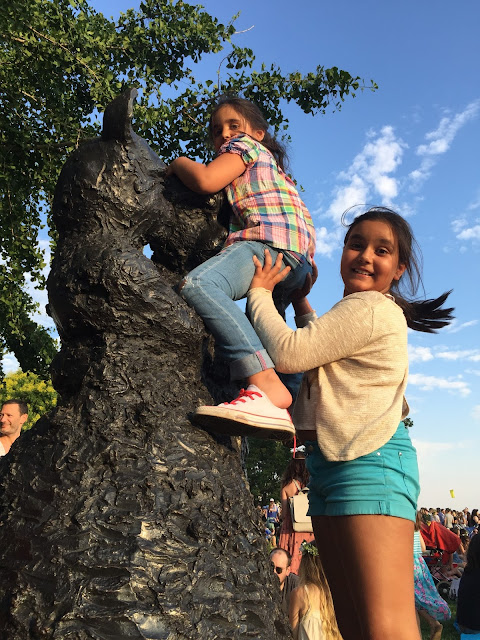 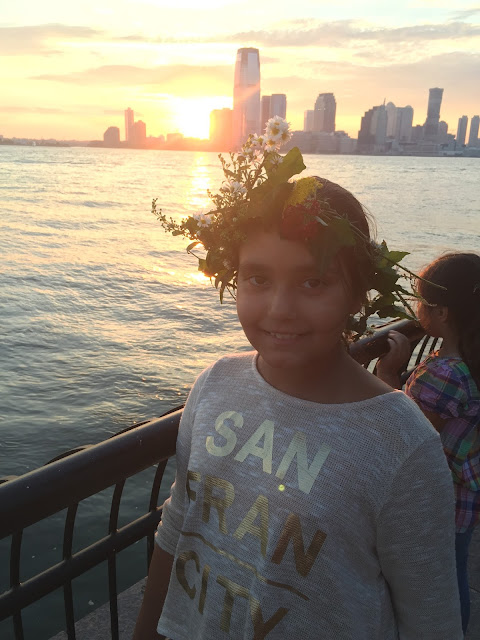 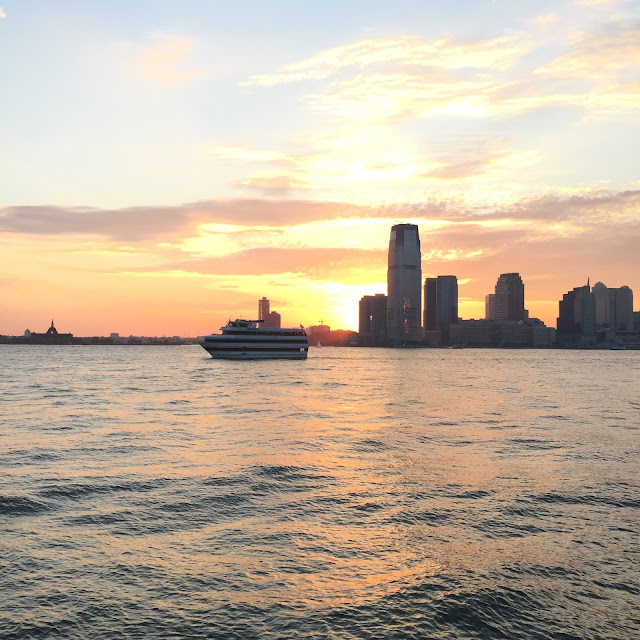 Posted by Liladyblogger at 11:08 PM 2 comments:

Keep Reaching for the Stars

Today was a new milestone in my daughter's life as she graduated from eight grade. I am a super proud mama and especially proud because she aced her finals and regents and got very good grades. She worked really hard on her honors classes, studied on weekends and evenings, and the hard work paid off. Next up in the fall is high school with new challenges and adventures. 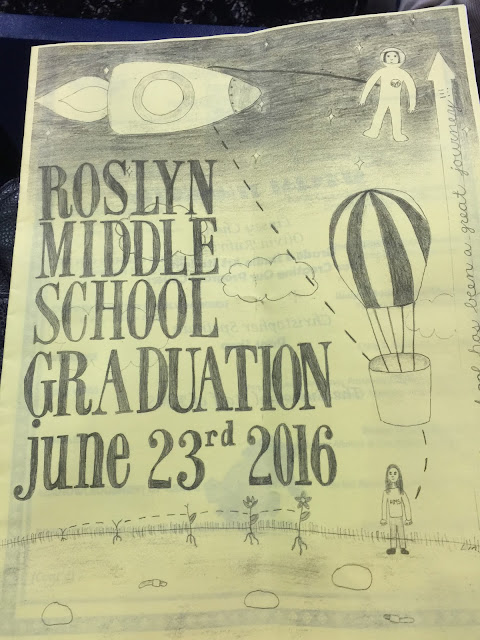 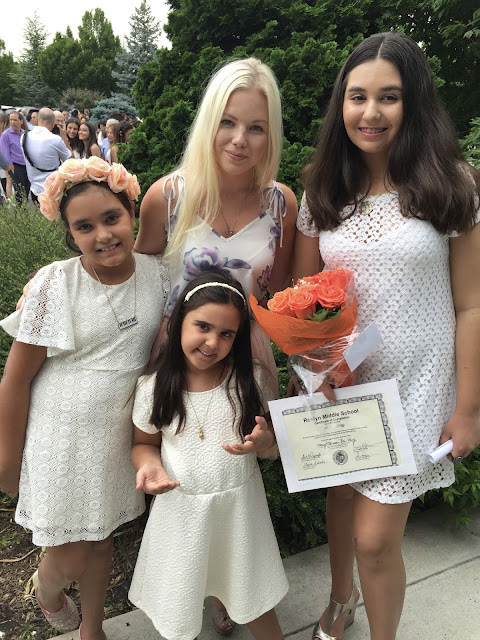 On this day we also had to say goodbye to our lovely au pair who had to leave to go back to Finland. What an awesome girl and we were so very lucky to have her in our family, and to get to know her. She definitely has a bright future ahead of her. She is very smart, very personable, down to earth, with great sense of humor, responsible, capable, and of course beautiful on the outside as well. We will miss her dearly! 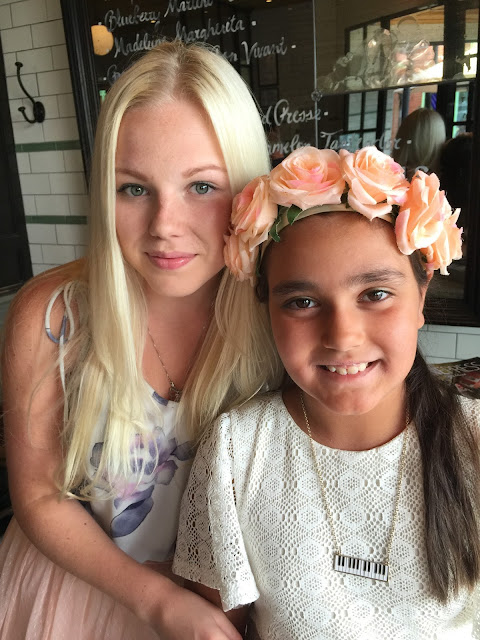 Posted by Liladyblogger at 10:04 PM No comments:

You may be wondering what the heck is going on since it's been nearly a month from the last time I've written. I feel like life is making a whoosh sound passing by in a frenetic pace and I don't have the time stop and reflect. But that will change now. I need to stop and smell the roses. Or at least memorialize some of what's going on, otherwise it will just disappear in the vacuum of time. And as those who know me know, I don't have a very good memory...  must start blogging again!

So here's what happened last Sunday, i.e.  Father's Day. It was the first Sunday in a long time that there was no basket ball, tennis or softball practices! In the morning daddy got an awesome breakfast at home, and was celebrated with cards and gifts, kids' drawings and letters, and then an awesome dinner at his favorite restaurant in the evening. In between he got to do stuff he loves -- home improvements & shopping :-) All in all a perfect day for him! 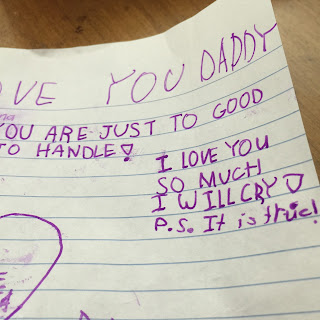 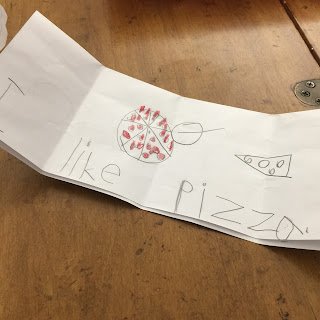 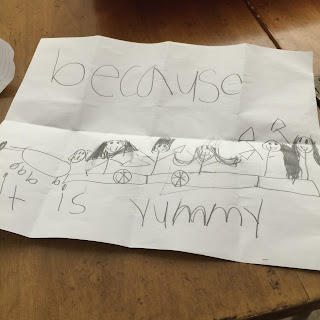 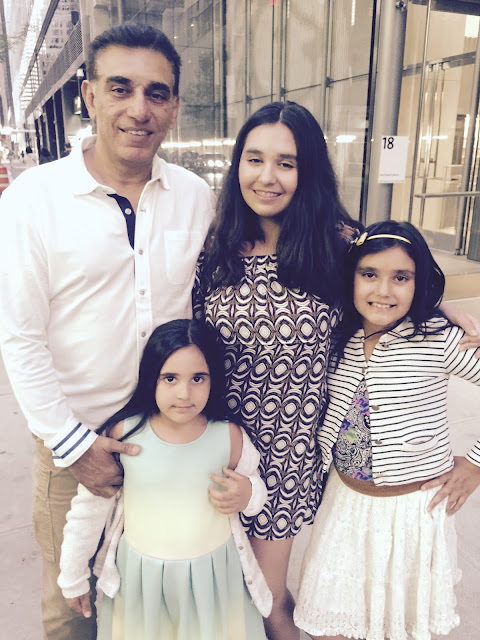 Posted by Liladyblogger at 10:03 PM No comments:

Liladyblogger
I am a 40-something working mother of three smart and beautiful girls. I live in Long Island, close to the beautiful beaches, but also near enough to commute to New York City.